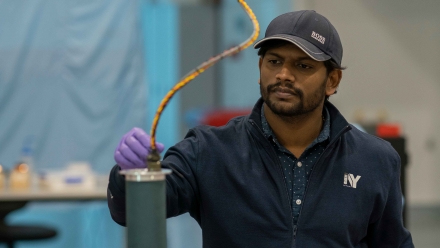 The National Space Test Facility (NSTF), hosted by The Australian National University (ANU) was selected as the first non-COVID-related research facility to reopen its doors to test a revolutionary piece of space equipment.

COVID-19 has forced many organisations to work differently, including the NSTF and ANU Institute for Space (InSpace) teams who are working remotely with businesses, institutions and researchers around the world via video. One of our most exciting remote partnerships has been with Queensland-based rocket company, Gilmour Space Technologies (GST). Director of ANU InSpace, Anna Moore, asked NSTF Manager Eduardo Trifoni about this week’s testing and how COVID is changing the way he and his team work.

Eduardo Trifoni is an internationally-recognised space test scientist with experience in carrying out research in frontier fields including hydrogen energy and experimental aerothermodynamics.

The National Space Test Facility has been closed since March. Reopening first was fantastic. After weeks of working with Gilmour Space Technologies via video conferencing, we received their component on its own. The GST team couldn’t make the trip to Canberra due to Queensland travel restrictions.

A first of its kind

Gilmour Space Technologies has a new avionic component of the guidance, navigation and control system they are developing for a revolutionary hybrid propulsion rocket that could be the first commercial rocket of its kind to launch in the world. It’s an Australian first. To be involved in this unique mission in a way that helps ensure success shows just how far the Australian space industry has come and how much innovation is happening here.

Their orbital rocket is set to launch in 2022, and this week’s intense vibration testing is meant to simulate the conditions of the upcoming rocket launch on this flight hardware. It’s the first in a series of tests that will help ensure mission success.

It was a great outcome, especially after so many weeks of working with their team remotely. We can’t wait to see their progress in the next several years. It’s exciting to watch our clients as they get closer and closer to new missions and new successes.

The reopening of the Mt Stromlo NSTF site was carefully considered by ANU leaders, to make sure the timing suits for our team’s health and safety.

The testing was performed with assistance from the ACT Government, under the Key Capability Area Funding Program. The ACT Government is a strong supporter of space testing here and they have been critical in helping many Australian space companies test their payloads at our world-class facility and with our team of experts.

Together, ANU and the ACT Government are making the ACT a hub for space excellence across Australia and the Asia Pacific region.