Is the “uncontrollable rocket” set to reenter Earth's atmosphere as bad as it seems? 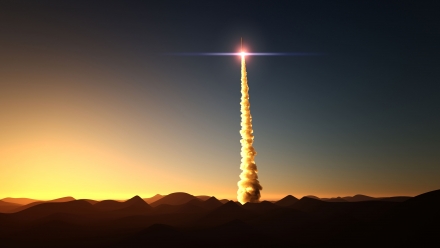 You may have seen the headlines that a Chinese rocket used to put a new space station into orbit is set to reenter Earth’s atmosphere in early May, and people are worried the debris from its reentry will land in a populated area.

Scientists and researchers around the world have been watching this for days, and now that more media outlets are reporting it, the headlines and stories sound like the plot of a movie with phrases like “plunge back to Earth”, “out-of-control”, “experts fear it could land on an inhabited area” and “crash site unknown.”

What we do know is the rocket’s core is about 30 metres high and weighs more than 20 metric tonnes. It’s big, and it is no longer powered, so it is at the mercy of our atmosphere. While it is in orbit now, it will slow down and fall back to Earth.

What happens after that is a series of unknowns. How much of it will burn up during reentry? If debris falls to Earth, where and when will that happen?

We asked three space experts their thoughts on this situation. Did their feelings match up to the stories we are reading online?

Former ANU InSpace Mission Specialist, Associate Professor Moriba Jah, has been highlighting the need for better space debris monitoring for years. He is an astrodynamicist, space environmentalist and associate professor of Aerospace Engineering and Engineering Mechanics and the Mrs Pearlie Dashiell Henderson Centennial Fellow in Engineering at the University of Texas at Austin. We asked his thoughts on the situation:

“Given humanity’s increased activity in space, these reentry events will become more frequent and statistically, there will be an increasing amount of space objects that will unfortunately survive reentry and possible kill people as a consequence.”

Since death and destruction are generally frowned upon around the world, we asked ANU InSpace Mission Specialist Dr Cassandra Steer FHEA, a Senior Lecturer at the ANU College of Law and a space lawyer with extensive international experience, her thoughts about this potentially dangerous reentry.

There’s no breach or violation of any international space law here. What we have is a very concerning situation that appears either to be a technical failure, to be irresponsible by design, but not unlawful.

In this case, the Long March 5 rocket was launched by China from a Chinese launch site, so the authorisation to launch – and any risk of reentry becoming uncontrolled - would fall under Chinese space law. International space law determines that all space activities must be “authorised and continually supervised” by the country under whose jurisdiction they take place. Countries legislate and regulate their own domestic space laws for any launch, operation or recovery of space objects, whether they are governmental or commercial.

Right now, there aren’t any specific binding international rules governing de-orbiting, however the non-binding UN Space Debris Mitigation Guidelines are important, internationally-supported best practices that call on countries to authorise only those activities which can demonstrate they are designed to limit the release of debris and minimise the potential for breakups.

Additionally, the 2019 UN Guidelines on the Long-term Sustainability of Outer Space Activities encourage countries to “take measures” to reduce the risk or mitigate the impacts of uncontrolled reentry of objects – in other words, to require high levels of testing and safety standards before licencing an activity. Because these are also not binding, there is no enforcement mechanism if it appears a country has not taken such steps.

So, what happens if debris from this rocket falls on a populated area?

Here we do have some hard law: the Outer Space Treaty and the 1972 Liability Convention determine that the launching State is “absolutely liable” for any damage caused by a space object on the surface of the Earth, or to an aircraft in flight. This means there is no need to prove fault or intent: China would be liable for the damage simply because it is the launching State, even if the uncontrolled de-orbit was a result of technical failure.

The tricky thing is enforcement. The Liability Convention has never been triggered in a lawsuit, even though there have been at least two international incidents where it has been raised as a possibility. Once in 1978 when parts of a Soviet nuclear-powered satellite Kosmos 954 landed in the North Western Territories in Canada, and once in 1979 when parts of the US space station Skylab landed in Western Australia. In both instances, it seems that the political cost of attempting to sue the responsible country was too great. Canada and the USSR sought diplomatic solutions, and Australia took no action at all – although the town closest to the landing sites, Esperance, issued a littering fine of $400!

Both those instances were in sparsely-populated areas. Although the environmental damage would have been cause for concern, as well as the fact both regions are of importance to Indigenous populations, the political stakes were apparently not high enough for Australia or Canada to take legal action. That might be different if debris lands in a highly-populated area and causes extreme damage or loss of life.

In fact last year, another Long March 5 rocket stage made an uncontrolled re-entry. Most of it landed in the Atlantic Ocean off the west coast of Africa, but some smaller pieces of debris were reported in populated areas of Cote d’Ivoire. It seems there are some concerning design issues with the core stage of this massive rocket, which means we can question how responsible it is to continue launching this design. China is setting itself up for some liability issues, as well as some political consequences.

How can we prevent a country or company from engaging in activities that could pose a problem for other parts of the world?

Although there have been various attempts over recent years to turn some of the unbinding norms into “hard” law, there is no real appetite internationally for new treaties of any kind, let alone new space treaties. Instead, a lot of hard work is being done in space diplomacy through various UN agencies, such as the Committee on Peaceful Uses of Outer Space, the General Assembly, and many multi-lateral and bi-lateral dialogues. Much of this work focuses on principles of “responsible behaviour” in outer space. It’s clear to everyone that the safety, security and sustainability of space activities are becoming more and more urgent, but political processes get in the way of forming new law. We, therefore, have to rely on the power of naming and shaming those who act irresponsibly.

This might not seem much, but in today’s geopolitical reality, it can be very effective. We are in a new multipolar era, where middle powers and smaller countries have a lot more impact on the global order and where economic and technological imperatives are incredibly important. The space sector is very much a part of political currency in the 21st century. Any actor – whether a country or a company – that acts irresponsibly or risks the safety of other space operations takes the risk of being globally ousted, both politically and economically.

You study and classify space debris. What can your work tell us about how this event may affect people on Earth?

These reentry events are currently rare and quite unlikely to hit populated areas, but they give the real problem, space debris in orbit, the extra media attention it deserves.

While the chance of being hit by space debris is very small (less than one in a billion), reentered space debris is harmful to the Earth’s environment. From a space environmentalist perspective, we often see debris being intentionally directed into our oceans to protect populated land areas.

This event will help more people understand that when we put objects in space, they either return to Earth as debris or stay in orbit. If they stay in orbit, they create a potentially dangerous situation for human explorers and the satellites we rely on daily for critical communications and Earth observation.

At the Australian National University, it’s our vision to incentivise responsible behaviour in space by tracking compliance with national and international space debris and sustainability standards. We’re working to provide the data and technologies necessary to increase the safety, security and sustainability of space now and into the future.

Space agencies and the military in various locations are tracking the rocket as it orbits Earth. You can follow it live here.